Added Aghanim`s to Enchantress. Invoker now gains attribute points for each orb he levels. Mjollnir - Static Charge changed from a chance on attacks to a chance on any damage - Double click now activates Static Charge on yourself 4. Alchemist - Unstable Concoction stun duration rescaled from 2.5/3/3.5/4 to 1.75/2.5/3.25/4 - Added an AoE effect indicator for the Alchemist player while he is charging his Unstable Concoction 5. Bone Fletcher - Death Pact attack damage rebalanced from 6/7/8% to 4/6/8% of targets HP 6. Dazzle - Shallow Grave now has a duration indicator for allies 7. Luna - Eclipse (Aghanim's version) target limit increased from 5 to 6 8.

Gyrocopter - Homing Missile now adds an ally only visual effect on targeted enemies 14. Furion - Wrath of Nature (Aghanim's version) max chain increased from 12/14/16 to 14/16/18 - Sprout code improved to reduce the chances of heroes sometimes popping out of it - Sprout targeting change from 6.67 removed Untested - Wrath of Nature can now be cast through the minimap and it will select the closest unit as the initial target 15. Keeper of the Light - Recall is now targetable through the minimap 16. Bane Elemental - Brainsap damage rebalanced from 75/150/225/300 to 90/160/230/300 - Added -disablehelp for Nightmare, to stop direct casting on allies - Nightmare fixed so it properly stops enemy potions 17.

It now fades out automatically whenever it hasn't moved for 8 seconds. Shadow Fiend - Added a new command (-souls) to see the number of souls you have collected - Added a new effect when you get a last hit with Necromastery on Nevermore 20. Fixed some minor issues with Javelin with spirit bear and invisible units (ancient bug 6.66b-6.67) 21. Fixed Liquid Fire interaction with Siege units (263667) 22. Increased Jakiro`s Macropyre (Aghanim's version) travel distance 22. Juggernaut - Omnislash no longer wastes a strike by considering banished units in its search 23. 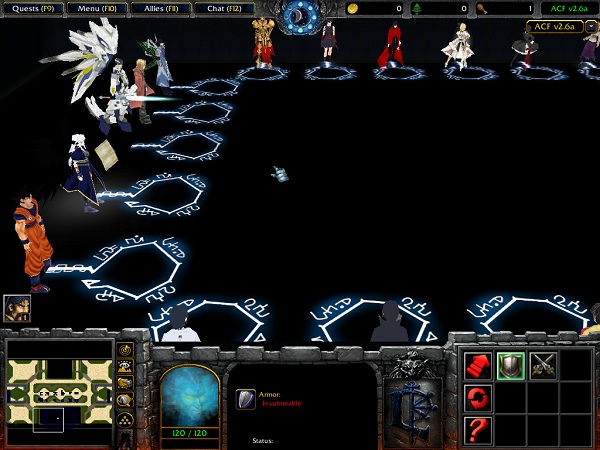 Fixed bots starting to use drophack to remove humans from game (ROFL). Sven now transforms into 'that red thing' when he casts his ultimate (Ability Code: A1WH) 37. Fixed Glyph of Fortification not showing icon 38. Leoric - Hellfire Blast damage redistributed to some on impact and some dps - Scoreboard now displays Skeleton King's ultimate cooldown time - Skeleton King will be automatically selected for you after he reincarnates 39. Added -disablehelp for Bloodrage 40.

Couriers can now carry Gem of Truesight (it loses its truesight while on courier) 48. Added a rabbit courier. Tether Stun duration reduced from 1.25/1.5/1.75/2.0 to 1/1.25/1.5/1.75 50. Added a new sub ability Focused Detonate that you can use on the minimap or in an area to detonate all nearby remote mines (AoE of 700) 51. Healing Salve. Double clicking on Healing Salve causes it to be used on your hero. Hand of Midas bounty text is now easier to see. Magic Stick & Magic Wand. AoE for gaining charges reduced from 1600 to 1200 - No longer give you charges if a spell was cast from the fog of war 54. Manta ranged melee converting fixed.

Metamorphosis manta use fixed. Old Scrolls of Teleportation returned. Human players will use the newest Scrolls, but AI will buy only the old version scrolls. OLD: A137 Order=channel NEW: A1R5 Order=tornado 57.

Troll Warlord. Battle Trance self duration increased from 8 to 10 seconds 58.

Added a sound effect that notifies allies near the location you are teleporting to 59. Added a ground effect when the water is gushing out from Torrent 60. Fixed Healing Ward to indicate the level to your allies instead of just for you 61. Fixed some issues with Shackleshot calculation where it could sometimes hit weird angles. Rebalanced the assist Gold & XP system.

Fixed a bug with Scepter Dismember and Linken's Sphere 66. Fixed lag on first cast of Adaptive Strike 67. Fixed interaction between Level 3 Rupture and Force Staff 68. Fixed damage AoE on Waning Rift being slightly less than the silence AoE 69. Fixed very minor inconsistency between the armor reduction and the damage AoE on Acid Spray 70.

Fixed some triggered spells from bypassing Last Will (on Necronomicon Warrior) damage return 73. Fixed a very rare cause where you could Soul Ring usage could be lethal 74.

Courier can no longer use Ghost Scepter (to prevent some abuses) 75. Fixed some minor incorrect behaviors when using burning spears at very low hp 76. Fixed some minor duration inconsistencies with Insatiable Hunger 77. Lone Druid - Leash range increased to 1100 - Fixed common scenarios where Spirit Bear would miss its attack as the target was moving - Casting Summon Spirit Bear while the bear is still alive will restore that bear's health instead of not allowing you to cast. Meepo - Fixed some targeting issues with casting poof (300996) 79. Tweaked condition for Slark`s Dark Pact usage.

I MIGHT TWEAK IT A BIT FOR THE NEXT RELEASES! Known problems: The script had a big overhaul of leak fixing and decrypting. Skills might not work, unseen bugs might occur. List of Incomplete Ai: Admiral, Clockwerk, Visage, Wisp, Giro, Eredar. Here's also a list of Heroes that Ai uses and its worth making them to -airepick: Alchemist,Spiritbreaker,Bristleback,Lycanthrope,Un dying,Lone Druid,Templar Assassin,Soul Keeper,Storm Spirit,Windrunner,Batrider,Tinker,Techies.

A Subreddit covering the WC3 RTS community. Do not post about WC3 custom games here. If your submission get's stuck in the spam filter message the moderators.